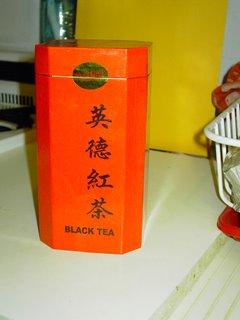 Ah, weekday breakfast. Slowly greeting the day, meditating on the important things, the things that endure, one of which is the subtle emanations of that superb tea brewing in that Ming dynasty gaiwan!

What do you say? That isn't what goes on in your house? Well, not in mine, either.

Which is one of the most important reasons why I periodically browse the supermarkets of New York's Chinatown for cheap teas.

This one is Yingde Hong Cha, a black tea from Yingde county of Guangdong province. (You won't find any English other than "BLACK TEA" on the package, nor Pinyin, so I've provided a picture.)

Straight out of the box and brewed with boiling water for four minutes, 4g to 10 oz, the cup aroma was equivocal: its basic character was that of a chocolaty congou, but not a really good one, or maybe a weaker second steep. Also, there was a slight sourness I associate with CTC teas, probably because they decay faster due to their geometry. (The box has a well sealed foil inner package inside, but who knows how long it sat on the shelf?) The taste echoed the aroma: Keemunesque but not like a top quality Keemun, no astringency, with a slight sourness.

So I roasted some of the tea lightly: five minutes at 250F in a toaster oven, allowing it to cool in the oven. Now the sourness is gone from nose and mouth. The basic character is still that of a congou with a chocolaty aroma, taste, and a suprisingly long finish. It's about what you would hope for from a mid-price China black from, say, Upton. Breakfast, in other words, at least at our place.
Posted by Lew Perin at 11:07 AM