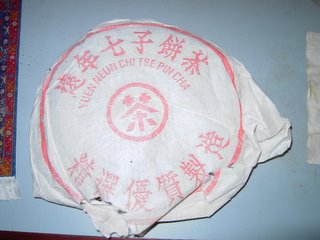 So what's inside the wrapper? It's a very, very good ten-year-old shu cake. Where's it from? Well, it's hard to say.

The characters corresponding to the non-Pinyin transliteration Yuen Neun translate as Distant Year, which is, I suppose, accurate enough after ten years, but was hardly true when the wrapper was placed on the bing. My friends Winnie and Michael, who are extremely fluent in tea Chinese, have been all over the wrapper and the unusually big nei fei, and there just isn't any categorical information on who pressed the cake and where. Winnie and Michael suggest that maybe the cake wasn't made exactly in Vietnam but rather near Vietnam in southern Yunnan, and that whoever made it intended it for the Taiwan market, where it would be important to disguise the tea's PRC origin.

OK, end of inconclusive gossip. How good is it?

Of all the shu Pu'ers I've tasted in the last few years, there's only one other I would rather drink: a 20-year-old mushroom that I have trouble believing is really (all) shu, since it tastes so much like aged sheng and supports an infinite number of steeps.

This Vietnam, or Yuen Neun, bingcha has some of the attributes of an aged sheng, but there's no doubt that it's cooked. The dry leaf is dark brown, and the first few steeps are typically shu: very dark brown and opaque.

The aroma of the brewed leaves in the first steep was sweet, fruity, and pondy. The cup aroma had that plus some wood, and some vague herbality. The taste had all of that except the pondiness: smooth, balanced between sweet and herbally bitter; a nice long finish too, which seemed to cycle among the various components. The second steep was about the same.

The third had less fruit and some toast in its aroma, suggesting the dry quality of some shu Pu'ers that I find not terribly exciting. But the taste was sweeter than in the first tow, a bit like some nice Jin Gua teas I've had, and better still, had kept its complex finish. In the fourth and fifth steeps, the aroma stayed more or less the same, but the herbal component seemed to clarify into camphor. The taste in the fourth and fifth was pretty stable, but I started noticing increasing richness and melony sweetness as the cup cooled.

By the sixth steep, the liquor was clear of suspended particles, and looked like hongcha. The aroma was still the same melon/camphor/toast; the flavor still had melony sweetness and camphor, but the pondy quality had left the scene. The seventh was the same as the sixth.

mmm, sounds delicious. you've clearly done your homework -- as far as one can take such things over here. do you suppose 'yuen neun' might be some odd pun on 'yunnan'? or is this sheerest coincidence?

The Carp wants to know why you didn't ask it.

truth to tell, i probably saw this phrase originally on the carp, when i was thumbing through the entries at one point. i'm now guessing that some vague [non-]recollection of that was what prompted my question in the first place.

your taiwan-export theory is an intriguing one, btw.