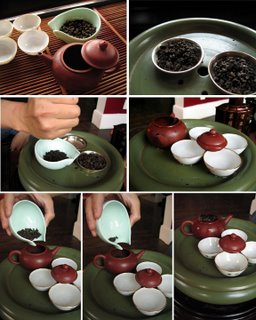 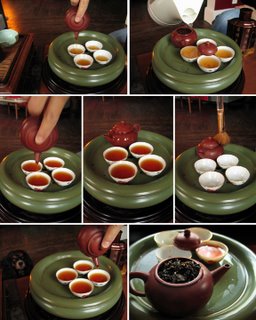 To carry-on my quest to Yixing pot's knowledge. I had chosen to shared my traditional Kung Fu pot. This pot was produced during the Chinese Culture Revolution in late 70's. And was one of the first tea pot which teaches me about traditional Cantonese / Fujian High Fire Kung Fu tea.

Using only Anxi North Cliff TGI, re-roasted and fired by Fujian tea master resides in Hong Kong, the liquor is one of the most intense and "Intoxicating". This traditional "Real" Kung Fu tea dated back more then 100 years ago in South East China: Hong Kong, Canton, Fujian and Chaozhou. The procedure to make 4 small cups are so complicated, people named it "Kung Fu Cha".

I had attached a step-by-step of my own simplify interpretation:

2. Preheat everything with rolling boiled water.

3. Traditionally the amount of tea should be 3/4 full. Some elder tea aficionados even make 1:1 ratio of tea:water, which considered "Toxic" to me. I am using half a pot to suits my own tolerant.

4. Separating the bigger pallets to smaller in 2 piles.

5. Partially crushing the smaller pile by hand into powder and set aside.

6. Gently fill up the bottom with half the medium pallets, then center with crushed powder and topped with bigger pallets. There are many different methods to "build-up" the inside, but I found this one as my favorite and much easier then the traditional.

7. Hitting the water at the rim of pot, not directly into the center.

8. Rinse. Pouring in a circular motion into the cups and jerk 3 times at end of the pouring.

9. First infusion. Around 30 sec. Always pour water around the rim with low-arching position to avoid disturbing the tea configuration. Pouring back the rinse to "Kept" the pot and age the exterior.

10. I usually only do 3 infusions, and the last one is the most savored.

11. Using a "kept" pot brush to distributing the liquor evenly.

You can see this teapot wasn't so well maintained or "kept" over 30 years of usage. But it does has it's own character. I have another one which was made in the same period of time, using the same clay and quarry without any usage, because I dropped the lid! You can see and compare the aging process.

This style of pot is called "Aquarius" or "Balanced" pot. It is the most fundamental style which every good potters had to mastered before moving on. Only number were stamped inside (rarely) and "Made in Yixing" were stamped at the bottom. Also there are only one hole from the inside of the spout. During the Culture Rev. there are no potter's name stamped, and the factories are divided by numbers: 1. 2. 3. 5. etc since. Until recently, they started to become independently owned.
Posted by toki at 3:18 AM

Ah, CR pots! Very nice pots, and the dropped lid is a real pity. I have heard from tea friends in Hong Kong that there are people who carry out repairs for pots, and since yours is still rather intact, perhaps it is possible. I'm not sure about the procedures or cost, and I'm sure the looks of the pot will take a slight hit, but at least you'll be able to use it again. Perhaps you should ask.

Your seasoned pot looks well polished, although the lid is slightly lighter in colour than the body, so it seems :).

High fire kungfu tea of the traditional variety is quite fun to drink indeed. Do you crush the tea at the bottom? Where do you usually get your supply? I go to the Best Tea House most often, but am curious to see where you might be buying yours.

Oh I missed that about the crushing and putting it in the middle, interesting, ignore me please :)

Mr. Chan, indeed. The Best Tea House have some of the most amazing pureh collections in Hong Kong, and their Dan Cong is also one of the best (since he rent a piece of the farm up at the top of Wu Dong mountain) so I was told.

I have a vendor in Thailand who can mend teapot with gilding, but do not know anyone in HK. Can you kindly ask your friends about it? And technical-wise, how do they do it?

I have only heard about it from chats with friends (at the Best Teahouse, actually). One of their sales, Tiffany, is very helpful. Maybe I'll give her a call and ask.
Where are you located?

I am located in NYC and you? Thanks anyway for the info., Tiffany might not know, and she has her plate up to the eyeball recently.... (in a good way)

What's up with Tiffany?

Splendid Corax photograph! It is you? And the too nice puppy! It looks at its Master making the tea! ;o)

> Splendid Corax photograph! It
> is you? And the too nice puppy!
> It looks at its Master making
> the tea! ;o)

mon bon bertrand, sois le bienvenu a' notre blog. i wish i could say that that was me. i assume that it is THSU's hand and equipage [and perhaps puppy] in the photo [tu verras le 'posted by ...' tout petit, au fond]. but if so, then who is behind the camera lens, i wonder?

For all the tea & teapot lovers, I am sure you all know this, just a reminder, beware of the counterfeit stuff! It may cost the same; however, it is much more enjoyable while getting it from your reliable sources.... Enjoy your Gong Fu Cha (kungfu tea).