By AEYAL GROSS
The English attitude to tea is a complex one. On one hand, drinking a “cuppa” is part of English tradition; “There are few hours in life more agreeable than the hour dedicated to the ceremony known as afternoon tea,” wrote Henry James. On the other hand, the typical English taste in tea is not exactly appealing to all serious tea lovers. The problem may lie in the poor selection of teas often on offer, in their customary dilution with milk and sugar, or in the English practice of leaving the leaves to over-brew in the teapot. However, as London is one of the world's major cities, it now finally has its share of specialist tea houses serving high-quality teas, prepared properly. These places are a far cry from the fancy hotels where afternoon teas may include excellent pâtisserie, but where more than often, even when good teas are sourced, they are prepared in the English method just described. 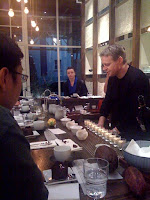 It could be that this persistence of the English tea tradition was partly and paradoxically responsible for the fact that, in the “western” world, Paris and New York led the way in having high-quality tea houses, while London lagged behind. But there is now finally a significant, even if still limited, presence of serious tea places that will satisfy tea connoisseurs in London itself. While an overview of the London tea scene may offer material for another posting, there is no doubt that TeaSmith is one of the jewels in the crown of the new London tea scene.

Located in the renovated Old Spitalfields Market, a stone’s throw from Brick Lane market, TeaSmith is the tea lover’s El Dorado. Originating from Scotland, proprietor John Kennedy and his Japanese wife Tomoko Kawase have built a beautiful tea bar, with an astutely built-in “tea boat” on the bar itself, where the well-trained staff can properly prepare and serve teas. 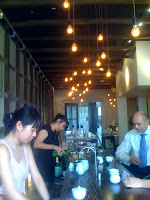 The focus is on Chinese and Taiwanese teas, with excellent green, oolong, and pu'er teas prepared to precision using the gongfu-cha method. There is also a great selection of Japanese teas, plus a few black teas; Indian teas are represented by an excellent Darjeeling from the Goomtee estate. Kennedy sources his teas carefully, and the selection is superb. The teas are prepared to perfection, taking into account the proper temperature and brewing time for each tea. TeaSmith also sells beautiful tea ware, mostly Japanese-made. Like the place itself, the tea ware on sale combines Asian traditions with modern design.

Since I have the privilege of living not far from TeaSmith, I often find myself, especially after enjoyable Sundays in nearby Brick Lane (which always must include a lunch at Story Deli, which serves what may be the world’s best pizzas), 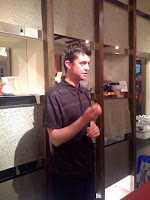 spending some time at the TeaSmith tea bar, tasting some of their new teas, and then buying some more to take home.

One of the challenges for a place like TeaSmith is the question of what to serve alongside the teas. TeaSmith eschews the classic English fare, and serves nor scones neither crumpets. Fair enough, especially given the replacement on hand: TeaSmith collaborates with one of London’s best pâtissiers and chocolatiers, William Curley, and serves biscuits and chocolates made by Curley especially to accompany tea. Most addictive are the walnut and miso biscuits, created by Suzue Curley, William’s wife and partner; we always stock some of these to take home and accompany whichever tea we are having. 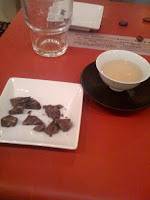 On most Thursdays, TeaSmith offers a master class where teas are tasted and evaluated. Occasionally these are replaced by even grander events. Such was the evening last month when John Kennedy and William Curley teamed up for a chocolate-and-tea tasting. Like lovers of wine, lovers of tea often believe that chocolate’s strong and often overpowering tastes may mask the subtle tastes of fine teas, so this evening was due to be a real challenge. I will admit that it is my habit to eat 100%-cacao-solids chocolate (pretty often it is actually Lindt’s 99% chocolate) with a fine Yunnan-based Earl Grey tea. I find the match superb. Consider that chocolate’s basic taste, like that of tea, is bitterness. (As a matter of fact tea, chocolate and coffee, all products whose basic taste is that of bitterness, subsequently became popular in Europe and North America in more sweetened versions). In chocolate that has 99-100% cacao solids, there is no sweetness to be tasted, and its bitterness can match tea superbly. But this kind of chocolate is certainly an acquired taste and not to everyone’s liking, and the match may also fit best with a tea with strong rather than subtle tastes, such as Earl Grey, a flavored tea where the flavor of bergamot is as central as that of the tea itself. So tonight’s tasting was different from the match I have grown accustomed to, on two counts: on one hand, we were tasting chocolates that had a high cocoa content, but still included enough sugar to be palatable to most chocolate lovers; on the other hand, we were pairing them with natural, unflavored and subtle teas. 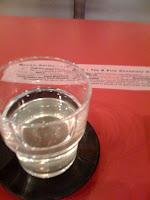 Upon arrival we were greeted with a glass of chilled Sencha, a tea with medium body and a lovely refreshing taste. We soon moved to the evening’s first warm tea: Sparrow’s Tongue, an early-picked Korean green tea. This was a very good tea, with deep aromas and tastes, and notes of cooked vegetables. With it we were served a chocolate praline from the excellent Italian producer Amedei: this was 65% chocolate and infused with caramel and Normandy sea salt. Delicious! While we tasted the tea and the chocolate, Kennedy and Curley shared with us their respective knowledge of each. (They also talked about how the fact that both of them are partnered with Japanese women has affected their attitudes toward the products they sell). The next tea was Shan Lin Shi, a high mountain Taiwanese Oolong tea. This tea had wonderful floral aromas. It was very delicate in its tastes and absolutely charming. It too was served with very tasty 65% chocolate from Amedei. Both were enjoyable, but at this stage I was still rather skeptical about the matching. With this tea, as with all others, we were served a few infusions, prepared gongfu-style, which allowed us to track the aromas and flavors throughout the different infusions. Next came the Phoenix Sung Special, a Chinese oolong tea described to us as coming from 500-year-old plants. This tea had a wonderful aroma with some roasted hints, and a beautiful structure. It was served with 70% Amedei chocolate -- a truly excellent and rich chocolate. The Phoenix Sung Special was followed by Oriental Beauty from Taiwan. This dark oolong tea was served both chilled and hot, in a way that allowed us to see how its aromas and tastes are felt in different temperatures. I thought the hot brewing certainly gave this tea more justice. Signifying the first time in this tasting where I thought that two elements really integrated beautifully, the tea had an aroma with both mushroomy and chocolaty notes. Given the chocolaty notes were reminiscent of 70% chocolate, the match went very well with Amedei 9, a chocolate of high cacao solids content.

At this stage we shifted to pu'er tea, tasting sheng pu'er 2003 from Yiwu, an excellent tea with deep beautiful aromas. This was the stage of the tasting when the chocolates tasted started including infusions of tea themselves, and this tea was served with tasty green pu'er ganache. But the two most impressive were still ahead of us. Phoenix Supreme, described (like the Phoenix Sung Special) as “another Chinese oolong tea from 500-year-old plants,” was really superb, with sweet notes of prunes on the aroma, and excellent taste. The chocolate it was paired with was based on a Phoenix oolong ganache, and, perhaps not surprisingly, the match was wonderful. The two really complemented each other in a way that changed my mind about pairing chocolate -- even one that is less than 100% cacao solids -- with tea. A similar sensation was created by the next match, of Tieguanyin Classic, an excellent roasted oolong, with a roasted oolong gananche base. As in the previous match, in Curley’s trusted hands, the infusion of the tea tastes into the ganache created a chocolate that made a superb accompaniment to the corresponding tea. All the teas tasted were very good, but these last two were the evening’s highlights, due not least to their excellent pairing with the accompanying chocolate. 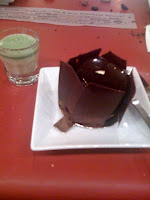 Lastly, we were served matcha liqueur, made by serving a shot of matcha tea floating over a shot of Bailey’s. Upon request I was also served some natural unblended matcha; I drank this with the Toscano chocolate mousse with matcha crème brûlée -- a dessert conceived for the evening by Curley, and an appropriate grand finale.

Curley’s new tea-infused chocolates have now joined his creations previously made to accompany tea, and are regularly available at TeaSmith, so in fact it is possible for others to recreate the highlights of our tasting session at this beloved institution. With great music selected by Kennedy playing in the background (imagine Nick Cave while you are sipping your pu'er), every visit to TeaSmith is an event to be cherished. Kennedy and his staff are always happy to discuss the teas they sell, so in a way, every visit can become a small tasting event. I consider myself very privileged to have TeaSmith as my local tea house and teashop, and this tasting was quite an experience.