[from an email to corax. posted by permission.]

I am sitting down to my first-ever Tianjian. Yes, my sample arrived today from Generation Tea, who say: “The storage of this tea hasn't changed in many centuries. The basket lets the tea breathe and age. Black tea, similar to Pu-erh, gets better over time. This tea is from about 2000 and has a few years under its belt. Try it, we think you will like it.” As a footnote, one might add that (in Chinese terms) pu'er is black tea: true black tea, or heicha. So too this Tianjian.

The dry state of the leaf presents an interesting aspect. The pieces are of all sizes. The colors range from deep black to medium brown to very dark green and even some yellow, with the predominant colors being dark brown and a greenish-black.

In the wet state, the leaves appear to be cut, and they are a fascinating dark green.

I placed 3.5 grams in my little 3-oz cebei, the vessel with the little fish painted in the glaze. I am using a matching tasting cup, very small. I rinsed the tea once and let it rest for abut four minutes. I used water at a roaring boil, infusing it first for 20 seconds and then for 10 seconds. I mixed both infusions through a strainer into a small glass pitcher.

The liquor is tawny, like cream sherry. It is very clear -- I see the little fishes swimming in the cup. Mike P.’s assessment in a recent e-mail is very good -- this is a very grassy true black tea -- like hay or straw dried in the field, but only in the most pleasant sense. It is not grassy in the sense of vegetal flavors and it is not Sencha-like. I am trying to decide whether this is like Shu pu’er, Liu An, or Liu Bao. It seems lighter in flavor than those. The taste is clean. There is none of that disturbing wet laundry taste that would indicate wet storage or forced aging.

The first two infusions mixed are, in a word, mellow. This is a tea that at first sip seems understated, but the aftertaste is actually stronger than the initial taste in the mouth during the swallowing. That’s a surprise.

As I parse the flavor, I also detect very faint mushroom flavors that feint and dodge on the palate.

I shall drink the third infusion by itself, and I will use the old man boil once again with an additional 15s added to the 20s of the second infusion.

This third infusion just might provide two tiny cups, so I will sip judiciously and see what I can discover. This is the antithesis of bull-drinking, a paradoxically careful wrong-fu.

The aroma seems to be more of cooked pu’er than Liu An or Liu Bao. Of the latter two, this Tianjian’s aroma may be more akin to Liu An’s. The third infusion is thicker in the mouth, almost oily, and the mushroom flavor is more pronounced. There is none of the horse blanket or horse sweat taste I sometimes encounter in cooked pu’er.

Despite the mouth-thickness and mushroom flavors, the tea still has a hay flavor that predominates. And further, the third infusion tastes drier.

Who can say whether I am drinking a good Tianjian or a bad one? It is a fish of a different stripe, and lacking criteria for comparison, I must judge it on its own merits.

I am searching for wood or camphor, the two flavors I like best and that I have encountered in fine, aged true black teas, pu’ers, and other post-fermented teas. I bought a little piece of old GYG from TeaSpring, and it had those flavors. A dear friend sent my elderly TeaMumsy a big sample of his grandfather’s 35yo Liu Bao -- a treasure tea strong in wood and camphor flavors. During my recent travels to Guangzhou, a tea master unlocked his chest of truly aged teas and shared with me his 100yo Liu An and 60yo Tael. Those too had the camphor and wood in abundance.

Well, the comparison is unfair. This Tianjian is but five years old, and I’ll be long dead and pushing up mature Osmanthus shrubs before the comparison becomes a fair one.

Adding fifteen seconds to the third infusion certainly did not make this tea too strong. For the fourth infusion, I’ll add twenty, totaling 55s.

[again, time passeth away, by a slightly larger increment]

This tea now is very much subdued. In fact, I can easily detect the nice flavor of our Cascade Mountain aquifer. Oddly, the hay and mushroom aroma hang in there, as well as the color, now the color of scotch and water.

What have I learned? First, I enjoy Tianjian -- or at least this particular production. Second, I would characterize it as very mild, yet nevertheless elemental. I would also suggest that it is better than most Liu Ans I’ve tried, and I would also hasten to add that the very good cooked pu’ers, my current readily available favorites being SFTM tuo chas and the Menghai Star beeng chas, are better because they have bigger flavors. Further, I would suggest that it is a unique tea, different from other true black teas, and well worth drinking. I am grateful that Generation Tea has made this tea available and that I can add this to my dossier of tea experiences.

I am tempted to buy two more ounces of Tianjian, place it in a canister that allows a little breathing, and drop it into my Let’s-Give-It-Six-Years-And-See-What-Develops basket.

I chatted with friend in Asia with access to excellent information regarding pu’er and other compressed teas. When I brought up the subject of Tianjian, he provided me with the following information: “Tianjian is a product from Hu Nan region, using grade 1 fine black leaves, and compressed into large baskets for storing and aging. They are divided into Tian Jian, Gong Jian, and Shen Jian, with Tianjian being the best. It is produced using grade 1 leaves, meaning small leaves, and flush, and sieved for selection. ‘Gong Jian’ means Tribute tea, and it is second in line. Shen Jian uses larger leaves.”

Below are two images of Tianjian vintage 1953, which makes it older than me, but decades younger than corax. Corax, as we know, is older than dirt and deserving of our respect. 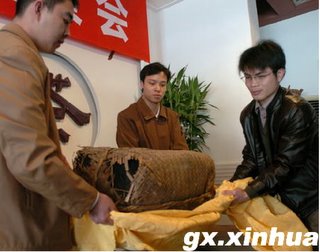 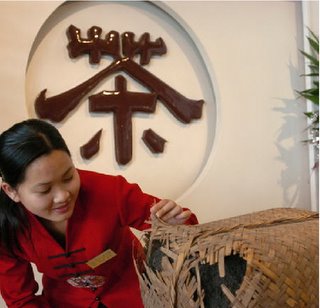 Wow, this is interesting stuff. One small cavil, though: some Googling on the Chinese Web has convinced me that your Chinese friend, as Chinese people often do, had a minor problem with his Pinyin. The third grade of this Hunan hei cha isn't Shen Jian, it's Sheng (as in Raw, or Alive) Jian.