a US movie premiere: ALL IN THIS TEA

i have much to relate about my time in san francisco last saturday, so i will split it up into less indigestible portions. this bit actually begins with a drive across the bay to berkeley, where tickets were waiting for us to attend the premiere of the long-awaited documentary, ALL IN THIS TEA, 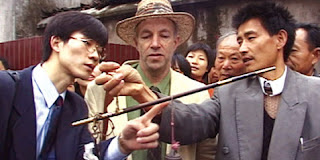 the latest release of les blank's 'flower films' production company. strictly speaking, this was the official premiere, but not the first-ever public showing, of the film; that, as far as i know, took place on 24 march 2006, in a special screening of a 'preview version' under the auspices of the national geographic society in washington DC. still and all, this weekend's screening was a gala event, and many of those involved in the making of the film were in attendance, including:
Posted by corax at 3:25 AM

Fantastic review. Thank you for this, corax. Only you could have written such a piece. Wow.

grasshopper! you are too kind!
i am glad if you enjoyed it.
i hope you get to see the film
itself sometime. it really is a bouquet to DLH, who richly deserves one; but it will also get people thinking about the miracle of artisanal china teas, and that is all to the good -- for all of us.