by STEVEN D. OWYOUNG
[[EDITOR'S NOTE: This very thought-provoking post comes from Steven Owyoung, former Curator of Asian Art at the St Louis Art Museum, and an internationally revered authority on the teas of Pacific Asia. Readers of CHA DAO will remember with pleasure his learned contributions on "Cha 茶 and Ming 茗"; on the Qianlong Emperor's Jade Tea Bowl; and on the Jade Spring. Text and images are published here by his permission. As always, the size of the images may be increased by clicking on them.]] 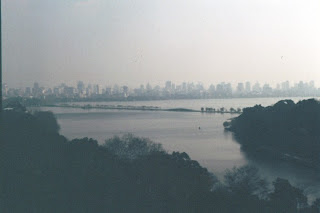 I have read with some interest your postings on pollution in China and its effects on tea and tea production. In addition to worker hygiene, pesticides, water and air pollution, and global warming, attention needs to turn to another kind of pollutant effect and what is known as "global dimming." 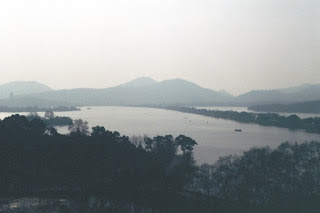 Global dimming is the reduction of sunlight that reaches the earth due to the amount of particulate matter suspended in the atmosphere and the resultant refraction and diffusion of light in the polluted air. The refraction, deflection, and diffusion of light in the atmosphere reduces the amount of sunlight reaching the earth's surface. In moderate to high pollution, the reduction in sunlight caused by global dimming may reach as much as ten to twenty percent. 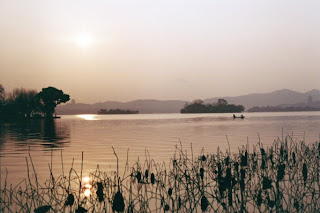 Sunlight, especially bright late winter sunshine, is crucial to the tea plant, especially the first spring flush. The marked reduction of sun reaching the tea leaves has a pronounced effect on the quality and quantity of production and on the flavor of the tea. 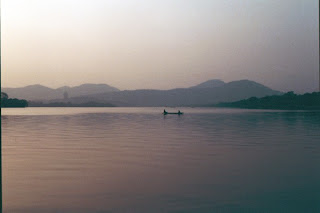 At midday, the nether shores of the lake were nearly invisible and even landmarks in the middle distances were but muddy shadows and dishwater brown. Even in the far south along the Li River in Guilin, the fabulous peaks were layered in a filmy gauze. Back in Shanghai and Suzhou, on the sunniest days, the air was thick with haze. Even by the most lenient standards, the air and skies of China are very polluted.

Given that tea and rare tea are dependent on sunlight and all its constituents, global dimming is a problem and a threat to tea to say nothing of other agricultural products.
Posted by corax at 7:43 PM

Can I add a note on global warming instead?

It comes from an interesting experience working quite closely with a Chinese green tea garden owned by the extended family of my partner.

Timing of green tea harvest can vary from year to year. A warmer year, for example, will yield an earlier first crop.

The last few years have seen earlier harvest, possible due to global warming (we can only speculate).

Traditionally, in the West Lake region, first harvest takes place 20 March, but has since moved forward to 10 March.

Of course, West Lake is not Fujian.

All I am saying is that the season is shifting forward, and tea harvested in a similar period 10 years ago was better than it is today.

Now back to global dimming ... does it have an effect on tea quality?

I can only speculate without first hand experience ...

Sunlight is important. But it is a different kind of light for tea plants.

The best teas are grown in higher altitude with foggy and misty conditions with dim light.

Between the two, I suspect global warming (temperature) has a bigger impact than global dimming (light).

Just a couple of skeptical notes. If the dimming observed was 'global' it would have been apparent here in rural NSW, where I grow moso bamboo. It wasn't. So perhaps the dimming was local: severe, undesirable...but local. (Krakatoa caused true global dimming by most accounts.)

Secondly, I am old enough to remember the Sydney winters of the '50's. This winter just past has been very like those of fifty years ago: damp and cold, with southerly winds dominating for long periods. (More recent winters have been drier, with westerlies dominating.) It will be interesting to see what develops now. I don't wish to offer any facile debunkings of 'global warming', inviting equally facile rebuttals. I simply wish to make a layman's observations.

I do have a copy of a prominent Newsweek article from the seventies which warns of catastrophic and undeniable climate change, namely, global cooling. Serious scientists were suggesting sprinkling soot over the poles to warm things up a little! (That debate, like the current warming debate, was declared to be over, with all the evidence in, with only a few hold-out skeptics saying nay.)

Though I live simply in an idyllic place, I know that I owe most of what I have to a civilisation based on heavy industries and synthetic materials of all sorts. My hope is that we attack waste and pollution without concocting a human-hating Gaian religion that lines the pockets of bloated, energy-guzzling plutocrats like Al Gore. (One rather hoped to have seen the last of Borgia popes and indulgence-sales.)

So let's keep a sharp eye on weather and climate, but let's be wary of the great curse of the present age : global ingratitude.

Let's assume, for the sake of the argument, that the haze of 2003 and 2006 was attributable to "dimming". Were the Dragon Well teas of those springs unusually bad?

(I don't doubt that man-made climate change is real, but there are data bearing on this, aren't there?)

readers of CHA DAO may be interested in this comment from mr owyoung, which was sent to me via email [and is published here with his permission]:

Global dimming. There may be a slight advantage to the persistent muddy haze hanging over the tea gardens of Hangzhou. The effect shades the tea plants during the period just before the spring harvest and thereby produces a very high quality tea. Such shaded teas in China and Japan are covered with bamboo blinds for twenty days in the field before picking. The technique is labor intensive, producing a highly caffeinated and rare tea of excellent quality. Despite the thick, dark atmosphere enshrouding the West Lake region in 2006, the Dragon Well tea harvested in the spring of that year from the village of Meijiawu was superior in quality, a truly superb tea.

Such a fine tea deserved a special occasion at a special place. The hilltop pavilion overlooking the scenic Lake came immediately to mind. Then, sitting in the pavilion and sipping the fine Longjing tea, wondering just how the Song and Ming literati must have felt seeing the crystal clear-blue skies, the verdant hills and pagodas, and the broad sparkling waters of the beautiful lake. It must have been a sight to behold.