by ADRIAN LURSSEN
[[EDITOR'S NOTE: Not long ago the US Mail brought me one of the more extraordinary packets I have been privileged to receive. It contained an envelope of creamy ivory stock, adorned with a postage-stamp from the Republic of China that shows Yixing teapots being filled with tea. 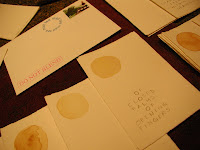 The envelope was stamped in red capital letters, 'DO NOT BLEND' [sic]. It was stamped, moreover, on the back with tiny poems in continuous-circle format. Inside were a number of small cards, made from heavy card-stock paper, each painted -- in tea -- with a full moon, and inscribed with a tea-related mesostic poem. I could not have been more delighted. I asked the poet if he might favor the readers of CHA DAO with a sampling of this beautiful and inventive art-form, so germane to our discussions and yet so fresh and unforeseen, and here -- just in time for the full Harvest Moon -- he has done so, with a lucid and stimulating explanation of what it is all about.

ADRIAN LURSSEN, a distinguished poet who has been published in such eminent venues as AGNI, holds the MFA in Fiction from George Mason University. Born and raised in South Africa, he brings an unusually global perspective to his writing -- and a lively and perceptive mind to his tea-drinking, as readers of CHA DAO will already know. He is the Founding Editor of a splendid literary journal, PRACTICE: NEW WRITING + ART, which deftly juggles the arts, verbal and visual, in innovative ways for the new millennium. It is a pleasure to share his work with you here. (To enlarge the images, click on them with your computer mouse.)]]

I recently learned via Lew Perin's Babelcarp translator (of Chinese tea terms into English) that the word YUN, used to describe a tea's aftertaste, translates literally as RHYME.

This is an exquisite fact; yet another example among many of how poetry and Chinese tea are inextricably linked. A tea doesn't have an aftertaste - it has a rhyme! The rhyme is soft or strong. Like some word rhymes, it can be felt at the back of the throat. Or on the lips. Or the tongue.

I could go on, but actually have been asked to describe tea moons, mesostics, and circle poems. And yet here I begin, without rhyme or reason.

Tea moons are moons that have been painted using tea. That's one simple definition. Lately I have been doing exactly this because 1) I think the results are beautiful, and 2) it serves as a personal record of teas I might never drink again. (This season's Baozhong. Or, a 1960s Zhong Cha. Or, an aged Shui Xian in limited supply.) 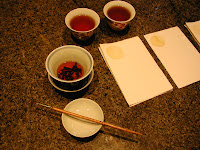 Whenever I brew a "notable" tea, I always place a few extra leaves in a tiny gaiwan sitting to the side and add a splash of hot rinse water from my main pot or gaiwan. Later in the day I'll return to the steep in that little gaiwan and, using a small watercolor brush, I'll paint moons on 3 by 5 inch cards (made by Italian paper company Fabriano and called Medievalis 208 S.) I have a large and growing collection.

I like moons made of tea. They remind me of farmers watching the spring sky for the correct moment to harvest leaves.

Generally, the moon also reminds us of the passage of time. And naturally, in ways too numerous to mention, time has everything to do with tea. The shape - a circle - also brings to mind the lip of a cup, the mouth of a pot, an unbroken bingcha.

The idea of tea moons came from Scottish artist, poet, publisher Alec (Eck) Finlay - who was the subject of a recent interview published in my literary magazine, PRACTICE: NEW WRITING + ART.

My friend Susan Tichy - the mag's poetry editor - conducted the interview. After the issue came out, Susan traveled to Scotland and met Eck Finlay in person. She presented him with a gaiwan and some Wuyi yancha (all PRACTICE contributors get tea from us). In return, Finlay sent me a tea moon. His was created in a slightly different way: he'd spilled tea (our Wuyi) onto a sheet of paper, placed a cup in the spill, and left it to dry. The spill and the cup turned into the faintest hint of a moon. It was lovely.

Seeing that first moon was like being struck by lightning. I understood it as a way to capture the remarkable experience of tea, which is weighted by time but actually in practice quite fleeting. (It is the same inclination, to me, that leads a person to make tasting notes. Some teas wait decades to be drunk; the experience, when it finally arrives, takes a mere afternoon. How to make it last?)

And so, tea moons - created in two different ways. There are bound to be so many more.

Lately I have been experimenting with Finlay's original method, which relies on chance more than mine does. I like it very much and have been doing more in that style. I think both methods have their place in an expression of tea art (whatever that happens to be) - one might be seen as an act of will, the other an act of chance. 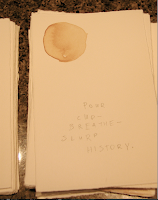 The painted moons are contrived to capture the specific colors of a brewed tea in the shape of a moon - as I said, a personal record of a tea life over time. The spilled moons do this, too, but they're magical for the way chance is involved: a cup is placed in spilled tea and as a result, a moon like no other is formed.

No need to compare, both have their place, but I mention them side by side here for this way they seem to represent two sides of the tea experience. Water temperature, pot size, leaf amount, harvest day, steep time, storage duration, leaf quality, blend recipe - all of these represent something we can control, the act of human will imposed upon tea. Like painting a perfect moon with a brush.

And then there is the part played by the unexpected, the random. The unpredictability of a winter season. Or, the unpredictable growth of a tea bush in any given year. The strength of the sun the day the leaves are picked. The vagaries of storage. Your mood when you brew a pot. (To name just a few obvious ones.) A chance spillage. A cup set within the spill. The moon that appears in turn. Aspects of chance, the art arising from it.

***
This all started not with moons but with circle poems.

In the PRACTICE interview, Susan and Eck Finlay discuss his worldwideletterbox project, which - in short - involves placing circle poems in letterboxes at 100 locations around the world. (Read the interview here; it is a truly amazing project and deserves a better explanation than mine. For the sake of space and time, I'll focus only on circle poems.)

Circle poems have no beginning, middle, or end. They start where you jump in, they end where you jump out. Their meaning often changes, depending on where you choose to start. 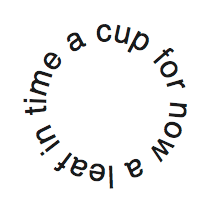 And, surprise, they are perfectly suited to the subject of tea. Last spring, while working on the magazine, I started writing tea circle poems - and oh boy has it been fun. My first was to do with aged sheng pu-erh ("in time a cup for now a leaf") - which must be read in a circle. 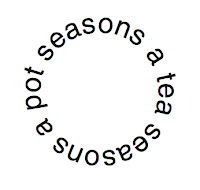 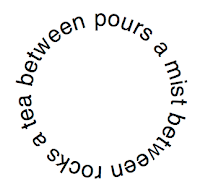 My favorites so far have to do with Da Hong Pao ("a tea between rocks a mist between pours") and Yixing ("a pot seasons a tea seasons") - both of which also must be read in circle form.

The poems are made into rubber stamps and then pressed in ink onto the back of the tea moon cards. All part of the fun. 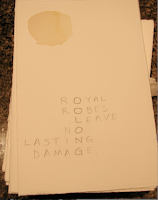 Along the way, Eck Finlay - who seems to live for collaboration they way I live for tea - urged me to start writing tea mesostics.

The mesostic form was invented (and used extensively) by American artist/composer John Cage. It involves writing a poem of only one word per line that forms, in vertical intersection, a word that relates to the theme or subject of the poem. Whew. (It's like an acrostic, in which the first letter of each line spells something, but in this case the word appears within - not at the beginning.)

For example, a mesostic about aged uncooked pu-erh: 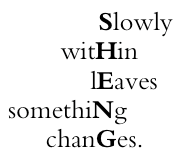 Or this one, to do with Wuyi yancha: 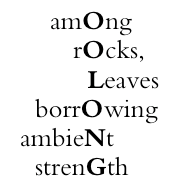 What I love about mesostics - which, like circle poems, are harder than they seem - is that the backbone word, the vertical intersection, can be read as an ending to the short poem. (Ex: Among rocks, leaves borrowing ambient strength: Oolong.) And as Finlay pointed out, the trick is to create mesostics that are more than mere lists. Although I like this list-type meso, to do again with yancha:

Another thing about mesos that I like so much: their grid-like nature and the vertical/horizontal text remind me of neifei. 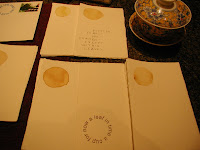 Or, of Chinese text grids in general. For this reason, and for all the other obvious resonance(s), I've been including related mesostics on the tea moon cards I've been painting.

Here's another, relying on "instruction" - which seems to me a frequent motif in tea art:

I've also been sending the cards out as gifts - collected in a series of seven. 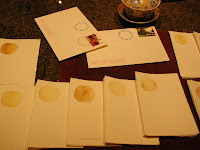 Each card can be read by itself, or as part of a larger whole: one poem about tea in seven stanzas, seven mesostics. And the recipient, the reader, can re-order the cards for each reading. Like tea, it's all part of that dance between chance and will.

All of which to say: you should try your hand at a circle poem or mesostic. Like tea, it is oh so addictive. And fun!

(by the way, I have been drinking a 1996 Menghai #7542, well stored for a decade in Hong Kong, while writing this. I can't yet put into words what the brew tastes like, but I can tell you that it rhymes on the roof of the mouth.)
Posted by corax at 10:48 PM

Just perfect...being a moon watcher myself, I find this idea captivating. Thanks for sharing! Holly

John Blofeld would have been loving this!
Totally MAGIC!

thank you steph, and welcome to CHA DAO. stop back anytime!