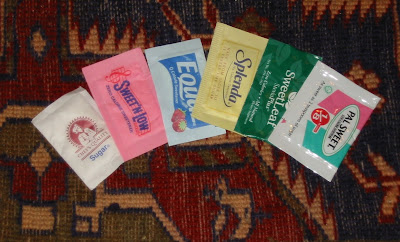 And Still More on Agave Syrup
Posted by corax at 11:23 PM

MarshalN said...
This comment has been removed by the author.
12:35 AM

marshaln, that's fascinating. two questions [to start]:
[1] did you learn to do that in asia? or somewhere else? and
[2] two packs to how many ounces of brewed tea?
i seem to recall reading that some tibetans add sugar [or sweetener of some sort] to their yak-butter tea, too. i wonder if that would be in addition to, or instead of, salt?

your title is probably truer than you realize.

i can't remember if we've talked about this research, but humans aren't the only mammals predisposed to appreciate sugar; recent research suggests that when given the choice, rats will choose sugar over [even larger doses of] cocaine.

obviously, there's a fair amount out there suggesting that william dufty was on the right track. (and this guy might be my new hero.)

my own struggle is no longer the caloric sweeteners, but the artificial stuff (yes, even stevia). this may be jumping the gun on part ii of your posting, but in short, i really believe them not to be good, but instead the lesser of evils. there's some anecdotal evidence (on the paleo and diabetes support forums) suggesting that for at least some individuals, AS can cause an insulin response (if not also a blood glucose response!); the mechanism looks like it might be pavlovian (i.e. 'sweet taste' linked to 'rush of carbs into the system'); even without a rise in blood sugar, humans (and other animals) are known to secrete what is called "cephalic phase insulin" in response to just looking at (or even *thinking about*) food.

the other piece of anecdotal evidence that many dieters (and non-dieters) know to be true is that sugar (or AS) can be a "trigger" food. sweet taste, for many, is very moreish - once you've had a taste, you want another one, and another, and the normal hunger/satiety cues that are easy to pay attention to when eating fat and protein are either turned off or at least easier to ignore.

so - longwinded answer short - good on the cultures who don't sweeten their tea :)

Sorry Corax -- my first comment was entirely in jest, repeating what a friend from Egypt has told me about their tea drinking customs -- two cubes of sugar in the tea, and then they will politely ask their guest "how much sugar would you like in your tea?". Granted, their tea is very concentrated, but that's a lot of sugar.

I eschew all sugar. In fact, I avoid eating sweets when drinking tea. It affects my tastebuds. The only exception is when I go for English style afternoon tea, then all rules are suspended and I'll eat as many cream/jam covered scones as I can get my hands on.