by AEYAL GROSS
[[EDITOR'S NOTE: This is the third instalment in UK correspondent Aeyal Gross's series on 'The Best Teas in London.']] 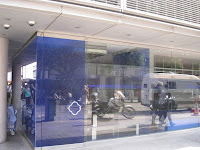 A set of blue glass doors welcomes the visitor who arrives at Yauatcha, which is located at the heart of London’s Soho. When one enters through these doors, a tempting display of pâtisserie is seen on a long counter just to the right of the entrance, while straight ahead lies a beautifully designed tea room, with an open tea-brewing area. Blue glass panels separate the dining room from a semi-transparent, semi-opaque area where dedicated chefs work on preparing a wide selection of dim sum. 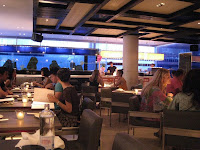 The previous entries in this series on The Best Teas in London took us to TeaSmiths, a tea room and tea bar where one can also buy tea and tea ware, and to Postcard Teas, a tea shop where one can also have tea. Yauatcha is in a different category yet again: It is London’s best restaurant for tea lovers. But it is not only a restaurant. While the lower-level dining room, with its starry ceiling lighting, serves as a restaurant (which deservedly won a coveted star from the Michelin Guide), the street level, while serving the full restaurant menu at dinnertime, serves as an all-day dim-sum teahouse. 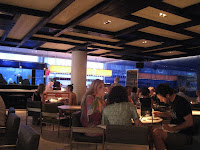 These, then, are the three pillars on which Yauatcha stands: Tea; Chinese cuisine, with an emphasis on dim sum; and French pâtisserie, prepared here with an Asian accent. And one can hardly think of a happier ménage-à-trois, or perhaps I should say mange-à-trois, than the one celebrated here, especially given that all three components of this triangle are of excellent quality. Tea and dim sum being a match made in heaven, London tea lovers and visitors to the city can hardly think of a nicer place to come for lunch, afternoon tea, dinner, or just some fine tea and dim sum at any hour of the day.

The teahouse menu at Yauatcha features about seventy teas. There are about twenty-five oolong teas (labeled here as “blue teas”) from Taiwan and China, joined by two green teas from Taiwan, five different kinds of Pu'er teas, and a few white, black and flower teas. In addition to the Chinese and Taiwanese teas, there are about a dozen types of Darjeeling teas, plus a few black teas from other areas in India and Sri Lanka. The teas can also be purchased to take home. 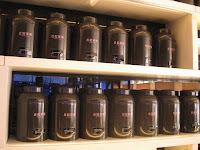 The restaurant menu includes a smaller but still excellent selection of the teas, including representative examples of the various teas that would go well with their food.

The Taiwanese and Chinese teas are sourced for Yauatcha from growers by Taipei-based Master Kung, who serves as the restaurant’s tea buyer and consultant. The Indian teas are sourced by Yauatcha directly in India. The restaurant, like its sister restaurant Hakkasan, a London Chinese restaurant also awarded the Michelin star, was founded by one of London’s leading restaurateurs, Hong-Kong-born Alan Yau. Yau is the brainchild behind some of London’s most exciting dining concepts. In 2007 he sold the company that owns Hakkasan and Yauatcha to the Abu-Dhabi Investment Authority, but he remains a minority shareholder and CEO; the general manager of each of the restaurants still reports to him.

Each day since its founding in 2004, Yauatcha has served afternoon tea, following the traditional English formula of sandwiches, scones and cakes. 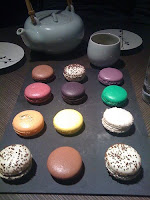 Here the latter includes a wide selection of “petits” versions of Yauatcha’s superb cakes, homemade cookies and chocolates, and exquisite macarons, as well as some fresh exotic fruits. Alternatively, in Yauatcha’s “Oriental Afternoon Tea,” the sandwiches are replaced by a selection of dim sum. Each of these services provides quite a serious sugar rush, and can easily be shared by two. And if one is not in the mood for so much sugar, one of the nicest, most enjoyable, and most civilized ways I know to spend a few hours in London is by enjoying one (or a few) of Yauatcha’s excellent teas with some dim sum selected à la carte, with a few macarons to follow. 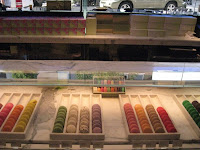 Readers who adore macarons as much as this writer should take note that the macarons here compete with the London branches of the Parisian pâtissier Ladurée for the title of being London’s best. Some of them, such as the matcha lime, chocolate jasmine, and blue tea macarons, are themselves infused with tea tastes.

When I met with Windy Ling, one of Yauatcha’s head waitresses and head tea trainer (and thus one of the persons in charge of training the staff on brewing the teas properly), I asked about her own favorite tea. Without hesitation she chose the High Mountain Fo Shou, an oolong from the Fo Shan Mountain in Chiayi, Taipei, Taiwan. 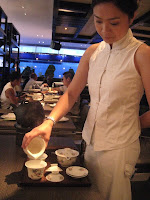 This is an excellent, very aromatic tea. Teas of this grade are prepared at Yauatcha in a gaiwan in the gong fu cha method, with the first few brewings prepared by the server, always using eight grams of tea in a brewing gaiwan. The server then instructs the customers on how to continue on their own, thus initiating them into the rudiments of the Chinese tea ceremony. All teas priced at 10 GBP and above are served in this fashion; the cheaper teas on the menu will be also served this way if the customers so requests. 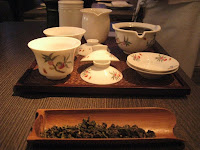 Otherwise they are served in a teapot in a single larger serving. Interestingly, the liquor served in the teapot is itself actually the result of three consecutive brewings: all teas served in a teapot are brewed in a glass pitcher where eight grams of leaf are brewed three times for respectively 12, 12 and 8 seconds. The pitchers have an upper chamber where the tea leaves are steeped, and a lower chamber to which the water is flushed after each brewing, so the liquor at the bottom of the pitcher is really a blend of three infusions. This method -- which we might consider a sort of deconstructed gongfu process, as it simultaneously effaces and reveals the effects that those three infusions would otherwise have played out over time -- does create a delicious brew. 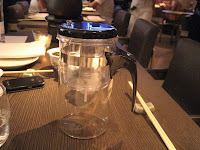 The few very expensive teas on the menu -- the ones (like the 35-year-old Pu'er) priced at 20 GBP and above per serving -- are served in what the staff refers to as the higher-class Chinese tea ceremony, in which the tea is served in very small aroma- and tasting-cups. All their Chinese teas are prepared at the temperature of 86°C, which seems to me a good benchmark temperature for most teas. Only when it comes to the Indian teas does Yauatcha follow the English tradition of steeping (and leaving) the tea leaves in the pot. But given the nature of the cuisine, it is principally for the Taiwanese and Chinese teas that one is likely to come here.

Two of the excellent teas on the list are Tie Guan Yins from Anxi County in Fujian. One of them is beautifully aromatic and light, while the other is an excellent representative of the darker style of roasted oolongs. Both of them go excellently with the dim sum, the high-roasted version working better with the heavier dishes, but really it’s hard to think of a mix-and-match that will not work here. 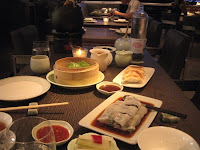 I have enjoyed Yauatcha’s Dragon Well (Long Jing) tea several times, both at the restaurant and at home, and have found it excellent, with very good and fresh aromas and taste; so I was curious about the relatively small selection of green teas on the menu. The green and the flower teas (both the Jasmine and the Orchid teas available here are also excellent) are actually the most popular among most customers, but the wide selection of “Blue” or Oolong teas, justly considered here to go so well with Yauatcha’s food, also entices customers to venture beyond the familiar.

~~~~~ · ~~~~~
Alan Yau had the vision to open a modern Chinese teahouse in the heart of London. His success has provided us with one of the best tea places in London, and a teahouse that each city should envy. Indeed, as Yauatcha is now part of a global business, the option of opening branches in some other major cities is now being explored, as has already occurred with sister restaurant Hakkasan. Yauatcha is a complex place to maintain at the high standards it currently keeps, as it requires a variety of talents: very well-trained Chinese chefs who can turn out excellent dim sum; excellent French pâtisserie chefs; and servers who are well-versed in tea and its proper preparation. 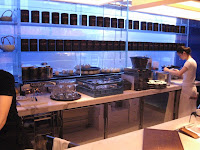 Another option being explored is to expand the market presence of Yauatcha’s own tea brand, which is currently being sold only in the teahouse in Soho.

As it stands now, Yauatcha is the tea- and dim-sum house par excellence for London in the 21st century. It still remains to be seen whether an attempt will be made to replicate it in other cities, and if so, how that will work. Meanwhile, no tea lover should miss out on visiting and cherishing this beloved place. Every time I come here, be it for a light lunch, some afternoon tea and dim sum, or for dinner with guests from out of town, my party and I leave wanting to return soon.

One correction in an otherwise well informed article... Alan Yau is no longer CEO of Hakkasan.
Check out this short article...
http://www.bighospitality.co.uk/default.aspx?page=articles&ID=203787

Thanks, indeed, it turns out that this change happened in the interim between the writing of the piece and its actualy publication. What I wrote was based on the information provided to me by Hakkasan's publicist when I spoke with her, and indeed she wrote me now when she saw this published to inform me on the change. Of course this raises concerns on whether with Yau not at the helm, the standards will be maintained. I really hope so!!!

I'd love to visit this place on a London trip and try some of their Pu-erh. Five different kinds? From the sound of it, they likely have some pretty good Pu-erh selections. --Spirituality of Tea

Congratulations! Your readers have submitted and voted for your blog at The Daily Reviewer. We compiled an exclusive list of the Top 100 tea Blogs, and we are glad to let you know that your blog was included! You can see it at http://thedailyreviewer.com/top/tea

You can claim your Top 100 Blogs Award here

P.S. This is a one-time notice to let you know your blog was included in one of our Top 100 Blog categories. You might get notices if you are listed in two or more categories.

P.P.S. If for some reason you want your blog removed from our list, just send an email to angelina@thedailyreviewer.com with the subject line "REMOVE" and the link to your blog in the body of the message.