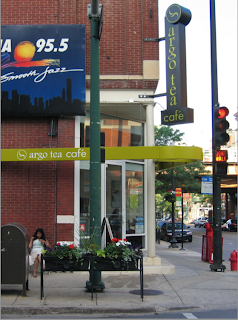 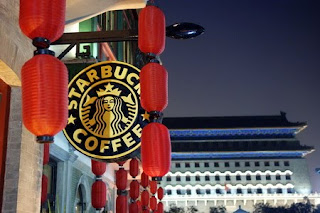 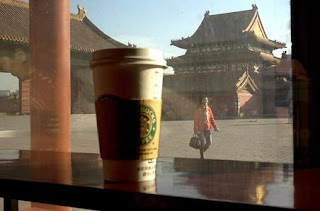 If anyone can successfully engineer such an audacious undertaking, it is likely to be Starbucks. But -- even with top administrators who are themselves Chinese -- can even Starbucks overcome presuppositions about Westerners and tea culture? An arguably more problematic issue: what long-term impacts might such a juggernaut have on tea culture and the tea industry in China?
Posted by corax at 10:52 PM

this will be interesting for several reasons:

Why bai mu dan? I've met many mainlanders who had only vaguely heard of white peony. It was originally a (largely) exported tea.

Starbuck's popularity is based on its image of being modern and Western. Introducing teas will wake the sleeping giants (i.e. tea houses). The giants can overtake Starbucks in tea by simply putting in softer seat cushions and cleaning the sunflower seeds off the tabletops.

In essence, US cafe culture is responding to the cries of "slow down" while the Chinese cafe culture is still calling "faster." Starbucks tea would likely dilute its ability to respond to cultural modernization in China.

So at Starbucks China the first tea selections in China are three carefully-chosen Chinese teas -- a white, a green, and an oolong: bai mu dan, bi luo chun, and dongfang mei ren.

I don't have to tell you that the last of the three is Taiwanese. Is Starbucks saying something politically, I wonder?

I love the idea of Argo calling themselves the Starbucks of tea. I'm surprised that they are doing as well as they are. They have a good atmosphere and unique products, but their workers lack any tea knowledge whatsoever.

I'm curious to see how well those three teas do in China for Starbucks. I want to hear the locals opinion on the teas.

lew, i had that same question ... of course, the political statement could be several things.

moreover -- i don't have to tell *you* that many of the oolongs sold nowadays as gao shan 'taiwan' teas are actually ... grown on the mainland, and shipped over to taiwan. not unlike the 'darjeeling' scam.

i think the daily lives of chinese [both on the mainland and on taiwan] are much more matter-of-fact than the official political positions might cause them to seem.

and even on the official level, relations are thawing, as again i know you know. as usual, commerce is leading the way:
http://tinyurl.com/ygk7gdq
and there are now direct flights from taiwan to the mainland. and a recent museum exhibit was co-sponsored by mainland and taiwanese museums ...

@jason: i assumed they chose bai mu dan as a gesture to the category of bai cha. on that theory, we should also soon see a hong cha and a pu'er added to the menu ...

@christopher: have you tasted argo's teas yet? i'd be interested in your take on the actual quality of their product. they use a sort of zavarka method of making tea.

I, for one, find it almost offensive to go to a foreign country and the only big ads I see are for American products. We really aren't THAT great. I am also somehwat surprised the Chinese allow them to sell tea. I hope it doesn't mean tea will become like beef and potatoes, much of which is raised to the specifications of McDonald's, the biggest purchasers of said foods.

@ Coraxx: I was recently at the very Starbucks location in the pictures above (Tian'anmen Front Gate) guiding a group of tourists who wanted coffee or a cup of tea. After five days of visits at least twice a day (I tried to broaden their tastes, I swear!!) I saw only Westerners frequenting the site. I think it may be erroneous to assume the tea is being marketed to native Chinese locals and tourists. At least at locations where Westerners can be found, Starbucks is making a killing per unit of tea.

@ Lew Perin: If Starbucks is making a statement, it is probably lost on the Chinese. In my experience the average person tends to view Taiwan as just another province of China, so the only significance of Dongfang Meiren may be that it is exotic to many of them.

@ Marlena: I think there's no need to worry about Starbucks' market power in the tea market affecting tea production. Fast food requires a local vendor for distribution, and McDonalds is good at being first, fastest, and cheapest in that industry. The tea market is more globally mobile though, and along with other reasons, it seems like a diversity of suppliers will continue to exist.

Although I'm not sure about this, and hope I am not wrong!!