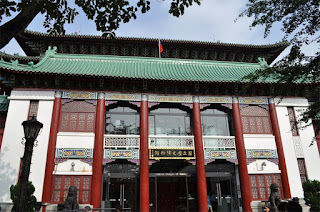 This exhibition is held at the National Museum of History of Taiwan until January 9, 2011.

The artefacts on display come from the Famen Temple, near Xi'an in Shaanxi province. During the Tang dynasty, Xi'an was called Chang An and was the capital of China.

In 1987, during renovation works, an underground palace was discovered under the pagoda of the temple. The items that were unearthed had been hidden for over a 1000 years. They include many Buddhist relics, but also imperial teaware that was used during rituals. They were put in this underground palace just 30 years before the end of the Tang dynasty.

Last Sunday, Teaparker guided me and 15 of his students through the teaware portion of this exhibition.

Before the visit, we were encouraged to read about Tang dynasty tea. Lu Yu's Cha Jing is a good place to start.

We are reminded that Tang dynasty used to produce green tea that was first steamed, beaten and then pressed into various cake shapes. Often, these small cakes would have a hole so that several cakes could be attached together with a cord (like Chinese coins).

1. Reheat a green tea cake over a stable flame: the cakes were well stored, but this wasn't enough to preserve the freshness of the tea. The heat would reduce the moisture and bring out the vivid scent of tea.

2. Break and grind the cake into powder with a specific tea grinder.

3. Sift (filter) the powder. Only keep the smallest powder so as to make the tea as smooth as possible to drink.

5. When the water has fish eyes, take a big spoon of water and add the tea powder to it and put it in the boiling water. Skim the bad dark foam that appears on top.

6. Transfer the tea in a big bowl and from there it can be served in smaller bowls.

The major item is probably the tea grinder. Compared to the previous link, we can see that it has been restored to its original shine (following the preparation for an exhibition in Japan): 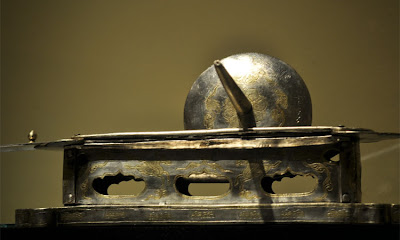 The golden decoration features flowers and typical Chinese clouds. However, we also find 2 flying horses with wings! These creatures belong to the European mythologies. This is one evidence of the presence and influence of Europeans in China during the Tang dynasty. (We can see more such evidence with a flint glass bowl with support ; its shape and style is Chinese, but it comes from the West, as the glass industry was more developed outside China at that time.)

The symbolic meaning we can grasp from this influence is that the Chinese tea culture is inclusive and open to other cultures. We are not breaking any rule when we incorporate elements of our own culture in our Cha Xi. And it's also OK if we add foreign influences in our Cha Xi. But we should do so with a sense of harmony and beauty. Our aim is to increase the happiness of drinking tea.

I had seen pictures of this silver grinder in Teaparker's "Cha Xi - Mandala" book, but I was stunned by its small size and thin shape. It's so exquisitely done. They must really must have loved drinking tea at the Tang palace! No other tea sets have reached this level of magnificence since. 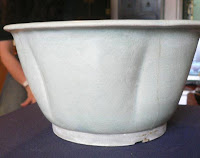 The Exhibition also displays a "secret color" bowl similar to this one. Before this archeological find, nobody knew for sure what is the color of the "secret color ceramic". The mystery was solved, because the discovered items were accompanied by an inventory list mentioning that the words "secret color".

It is celadon, and the current consensus is that the "secret color" ceramics came from the Yue kiln. 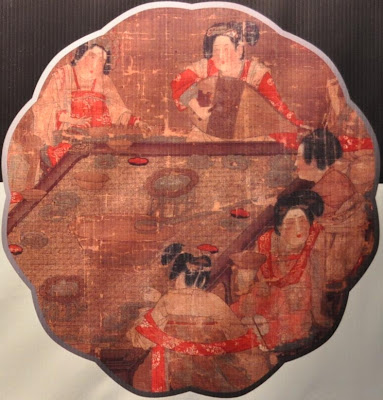 If you come to Taipei before January 9, 2011, this is an exhibition you can't miss!
Posted by TeaMasters at 2:49 AM

I saw this exhibition in Xi An a few years ago. It's fascinating! There are some tea ware and dinner ware made of techniques only found in book before the discovery of underground palace. People were debating harshly if they were legends or truly existed until they were discovered.

Also there is a finger bone that's said to be the Buddha's. Radiology technique proved that it was from the era when Buddha lived in India.

I miss this exhibition very much!