[EDITOR'S NOTE: this is a somewhat expanded version of a recent post to the newsgroup rec.food.drink.tea, affectionately known to all as RFDT, where the term cha dao was brought up.]

the phrase 'cha dao' is not an uncommon one. it is likely to show up in a variety of places and contexts where china tea is concerned, including even vendor sites, where it will be associated with the implements used in gongfu cha -- the tongs, scoop, pick, funnel, etc. the word 'dao' [or 'tao,' as it is transliterated in the in wade-giles system] means -- literally or metaphorically -- 'road' or 'path,' so that 'cha dao' might mean 'tea road' or 'the way of/to tea.' the cha ma gu dao, or 'old tea horse road,' was in fact a system of trade-routes on which tea was exported from pu'er, in yunnan province, to various other parts of china and beyond. 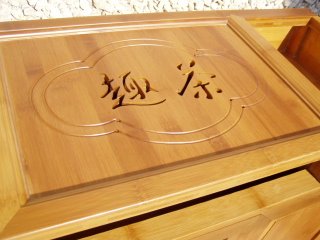 the word 'dao,' like the english 'road,' can also have profound metaphorical applications. indeed 'life is a journey' [and the related 'time is a moving object'] have been identified by george lakoff, mark johnson, and mark turner, in their landmark books METAPHORS WE LIVE BY and MORE THAN COOL REASON, as two of the basic 'conceptual metaphors' of the english language. [a very handy example of the road/journey metaphor is robert frost's famous poem 'the road not taken.'] the image is immediately evocative.

this 'road' metaphor was clearly an irresistible one in chinese culture, even in ancient times. to someone familiar with chinese culture, the word 'dao' immediately recalls the classic text DAO DE JING [or, in wade-giles transliteration, TAO TE CHING], traditionally ascribed to a sage named 'laozi' [W-G lao tzu]. along with the ANALECTS of confucius [kong fuzi or kongzi; W-G k'ung-fu-tzu] and the YI JING [W-G i ching], it is arguably one of the three most influential texts in premodern china. certainly daoism has undergone numerous permutations and expansions over its considerable history, as thomas michael elaborates in his recent book THE PRISTINE DAO. the rarefied, austerely philosophical version propounded by laozi was but one iteration of this; over the centuries, popular/populist forms of daoism have included such features as shamanism, spiritism, and alchemical inquiries into physical immortality.

in more spiritual contexts, the term 'dao' [in the phrase 'cha dao'] might be used to connect the more metaphysical aspects of tea-drinking with various philosophical or religious systems, such as daoism [taoism] or its avatar, zen buddhism. [the japanese term that translates 'cha dao,' namely chado or sado, is used to refer to the study of the cha no yu or tea ceremony; here its zen connections are perhaps as clear as anywhere. see e.g. wikipedia sub uoc. 'chado' for a handy summary.] certainly daoists and buddhists alike would affirm that the universe, and everything in it, is pulsating with qi [W-G ch'i] -- the energy that literally makes the world go round; they would readily recognize the phrase cha qi as referring to the qi to be found in tea [and absorbed by the one who drinks it].

all that said, i think the term 'cha dao' can have a simpler, secular application as well: our abiding interests in tea, pursued over time. this is made easier to grasp by the fact that 'way' or 'road,' as we have noted,is used as one of the basic metaphors of human life. [come to think of it, i wonder if the vendors who run inpursuitoftea.com -- no professional affiliation here, n.b. -- intended their company name as a loose english translation of 'cha dao.' sebastian, frank, are you guys reading this?] since the words are putonghua [i.e. 'mandarin chinese'], i thought they would encapsulate the subject-matter of the then-fledgling blog in a brief and elegant way.

in any case, because of this propensity to obfuscation, i have adopted the convention [on the blog itself] of writing 'cha dao' [in lower case] to represent the latter meaning, and CHA DAO, all capital letters, to refer specifically to the blog itself. i recommend this convention to others as well, if only to save time and confusion.