the munificent mr chan kam pong, known online as 'cloud', has supplied a staggering number of samples -- literally round the world -- to participants in his 'Let's have a cup of 2003 Silver Dayi' tea tasting. for this, four entire bings of 2003 silver dayi brand sheng pu'er cha were broken up and distributed. no detail was left unattended: even the postage was tea-related, using special HK postage stamps that featured traditional chinese tea-containers with their red labels. there are copious photos of the tea in various stages of dismantling and packaging on cloud's website. his only stipulation was that each participant in the tasting produce a 200-word review of the tea.

i was the fortunate recipient of one of these samples. for my review, my fantasy was to produce a poem in traditional 七言 詩 [qi yan shi] form -- the seven-character genre popularized in classical chinese culture, from the han dynasty onward. 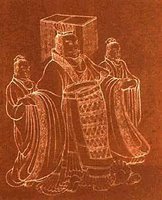 the genre became famous in the bo liang format, so named after the 柏梁 臺 'bo liang [cypress beam] pavilion' in the gardens of the long-reigning emperor wu 汉武帝 [han wu di, trad. 漢汉武] of the western han dynasty, but arguably reached its zenith centuries later, in the seven-character 近體詩 [jin ti shi] of the tang dynasty.

but even if that had been within my poetic power, i knew it would have severely reduced my readership! so i have settled for the faint impression of a tang-style poem, in the verses tendered below. i say 'faint' because -- even apart from the loss of the vital tonal 'music' of chinese verse -- the bo liang demand of universal end-rhyme is virtually impossible to achieve in english. in poor recompense for this loss, i have tried to achieve an english prosody that might seem to invoke the traditional rhythmic chanting style used for declaiming such poems in putong hua, and have preserved the essential couplet-compositional nature dear to chinese poets. given the stringent limitations of the metrical genre, and my attempt to use [wherever possible] single-syllable words, i have set aside my usual austere tea-tasting reportage for a more impressionist group of images. i hope that these will nonetheless evoke something of the luxuriant experience, and sensuous pleasure, of a pu'er cha tasting. think of this poetic rendering as rather in the relaxed mode of 古詩 [gu shi, a less stringent genre]. chan kam pong, xie xie ni!

water boils to eyes of crab,
wets the leaves of chan kam pong,

brief to rinse, and then to rest,
then again -- this time to brew.

in a flash i scent the smoke,
wood-fires built in far yunnan,

made to dry and parch the leaf.
first brief sip rolls on my tongue.

coats the mouth and lingers long.
not a tea for faint of heart.

keeps the pu'er taste alive:
smoke and wood, with moss and must.

further brews, and then a mix
first of bitter, then of sweet.

sharp smoke scent, slow sip, and then
cool and fruit. and then, smoke yun.

dry sensation, not too strong
tugs at tongue and mattes the mouth.

further brews: the sweet hui gan
fills the mouth when sip is gone.

many brews: the leaf, first brown,
swells and grows, and flushes green,

full of smoke, then more alive;
gives its liquor, rich and gold.

comes the evening. shadows fall.
round the moon a wreath of ... cloud.

A fine review, thank you - I was rather hoping that someone might eventually step into poetry for us. My reading of your latest entry takes me to the very point at which water touches leaf.

> My reading of your latest entry
> takes me to the very point at
> which water touches leaf.

thank you, hobbes! there is no higher compliment than that. i might add in response that your own haiku here perfectly captures the essential spirit of wabi-sabi. thanks for letting us have it here!

The Tea Ceremony Saijiki of Japan

Thanks to all for this great BLOG !