by ADRIAN LURSSEN
Next in the Yixing-versus-gaiwan saga, I tried the 1998 Haiwan Sheng Beengcha #7548, apparently one of the last batch of beengs made by Chef Zhou before he started the Haiwan factory. (It comes wrapped in the CNNP paper.) Very tightly compressed, the dry cake smells wonderfully of menthol and mint and eucalyptus -- and a creamy sweet something else. It's doubtless unfair to compare apples and oranges (or Banzhangs and Yi Wus) but I'll do it anyway: there are so many ways that this tea is entirely unlike the 2005 Xi-Zhi Hao, including age and the clear fact of blending. Location, too. Part of the blend here is a harvest from Yi Wu -- which is unmistakable: that dry and spicy-sweet pine forest floor smell. Love it.

This time around I used the 100-ml gaiwan and a Yixing pot that has grown on me -- a 100-ml Tian Qing Ni Xiao Pin purchased from Seb and Jing. The pour is good but not great (I like the liquor to flow a little faster, though some might find this rate just fine). 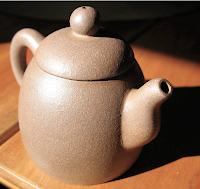 The pot has developed a spectacular patina and feels to the fingertips like good stoneware, so I have been using it more and more for mid-aged sheng puerhs. Size is perfect, too. For each I used 5 grams of leaf.

Wow. What a tea. I love it. A nice blend that has passed its first ten years quite well, it would seem. In the warmed gaiwan I smelled camphor right away. After a moment the aroma had become: raisins! Fermenting fruit, sweet and spicy. The gaiwan's rinse was a greenish-yellowish liquor tending to orange. The green was a surprise, but perhaps a reminder that this is very much a dry-stored tea. After the rinse the gaiwan lid smelled of brassy vegetation (cabbage?) and the cup: burned floor of a pine forest. A good start.

The aroma cup after the second infusion (15 secs) was sweet and salty -- what in lesser teas might be closer to "fishy." The soup almost seemed bubbly and oily, and it coated the mouth and throat -- seeming strangely lighter "on the edges" -- whatever that might be. That Yi Wu "pine" made itself known right away, and everything was balanced. Dry but not overly so -- sweet and spicy and, I wrote: "pure" ...

Third infusion (20 secs) and the liquor turned golden orange; stayed that way throughout. In fact, what the tea achieved at this point it maintained without let-up for at least seven more infusions. The brew truly had a "soup stock" kind of character to it. 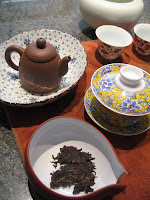 That's meant to be a compliment. It was "light" but with substance. The aftertaste was sweet and spicy without bitterness, and coated the mouth and throat. (Not so much the lips.)

At one point early on I smelled the gaiwan and it was as though someone had lit up a joint. I kid you not. A strong smell, too, that lingered. That gave way after a minute or two to something I described as "BBQd shellfish." The earlier salty sweet fishiness was mingling in lovely ways with the pine spiciness. What a tea.

I drank until starved; had lunch; then started again with the Yixing pot. In all fairness, I think I need to re-do the Yixing test -- my mouth had been spoiled by homemade turkey soup (excellent, by the way, and happy Thanksgiving!), but the pot experience, if muted just slightly, did come close to what had happened with the gaiwan. The liquor became orange-gold right away, and the nuances were harder to find with the Yixing, but the tea was lovely again. And before giving up on notes and attention with a later brew, I did write "wintergreen." This after many many infusions.

An aside re: timing and subjectivity. After the tasting I searched on the '98 Haiwan to see what, if anything, folks were saying about it. Found this review by Phyll Sheng, whose opinion I value and follow. About a year-and-a-half ago (May, 2006) he didn't think much of the tea. And, according to the follow-up comments, there was consensus. File under: Go figure! Phyll, if you read this, send me your mailing address -- you should try the cake again. :-)

Finally: apologies for the poor quality photographs. Not my thing. I did, however, have two comparison cups of Haiwan brew at 45-second infusion. Orange-red, crystal-clear liquor. Great. Was about to photograph them when my wife came home, saw various cups of tea lying around, gulped down the two comparisons, and walked into another room. On her way out: "Hmm, nice tea. Thanks!" So you'll just have to image the side-by-side. There was, I think, no difference.

Next up: same test, gaiwan versus Yixing, this time with Shui Jin Gui Wuyi yan cha. Over and out.
Posted by corax at 8:15 PM

Oh dear- pity about the photos, although I did have to smile about it. A reminder of the impermanence of all things, perhaps?

May I ask (and I apologise for the stupidity of this question in advance, but I'm a novice when it comes to the kinds of exotic teas you discuss in your article) what do you use to heat the small amounts of water required for your 100ml pots?